UGA Skidaway Institute of Oceanography researcher Chris Marsay has stood on top of the world—literally.

Marsay arrived at the North Pole in early September and took part in the U.S .GEOTRACES Arctic Expedition on board the U.S. Coast Guard Cutter Healy, a polar icebreaker.

Marsay at the North Pole in front of the U.S. Coast Guard Cutter Healy.

The project is part of an international, multiple icebreaker effort to conduct geochemical sampling of the Arctic Ocean. The cruise arrived at 90 degrees north on Sept. 5 in what is the first occupation of the North Pole by an unaccompanied U.S. surface ship—submarines usually follow ships below the ice. While at the pole, the Healy rendezvoused with the German ship conducting the German leg of the GEOTRACES Arctic program. 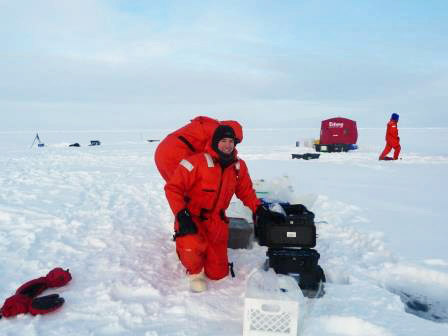 Marsay with his gear at the North Pole.

Marsay is working with UGA Skidaway Institute professor Cliff Buck and scientists from Florida State University and Rutgers University. The research team was funded by the National Science Foundation to collect samples from the atmosphere, precipitation and surface water from melt ponds during the cruise.

“Our research goals are to describe the chemistry of atmospheric deposition to the region and quantify flux rates,” Buck said. “These data will then be shared with the scientific community to better understand biogeochemical cycling of trace elements and isotopes in the Arctic Ocean.”