In September, Gray’s Reef and its partner, Georgia Southern University, completed the last in a series of dye and drifter releases to track the outflow of the Altamaha River. The Altamaha is the third largest river basin on the Atlantic seaboard, and its watershed drains almost 25 percent of Georgia’s land mass.  It is also the closest freshwater source to Gray’s Reef, found 16 miles offshore. 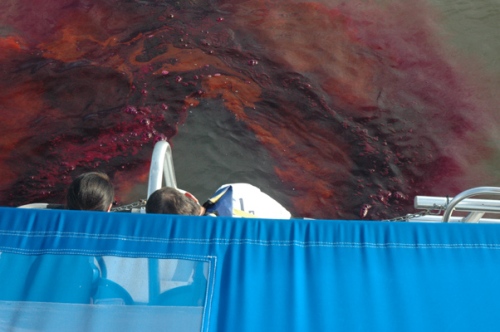 Dye being released from the stern of the research boat.

By tracking the path of the dye and drifters, researchers can provide estimates of the extent to which the Altamaha River outflow delivers various contaminants, nutrients, freshwater and solid material to hard-bottom reefs such as Gray’s Reef and to Georgia’s coastline.

Georgia Southern University invites educators to replicate the drifter study and has developed an instructional video and guide for future drifter deployments.