UGA Skidaway Institute has added its newest and smallest research vessel to its fleet. Researcher Clark Alexander’s team is in the process of configuring a new shallow water survey boat to enhance its capabilities for collecting high-resolution bathymetric data. 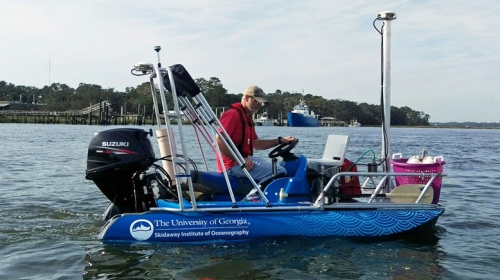 Hydrographic surveys in shallow environments present challenging logistical situations.  The new Hydrographic Survey Launch will greatly extend the range of tides and conditions available for survey missions. The launch is 10 feet long and will be equipped with a Knudsen Mini-Sounder single-beam sonar, a dual head GNSS GPS system, an inertial motion sensor  and a waterproof touchscreen computer.

The University of Georgia Skidaway Institute of Oceanography entered the fourth year of its black gill research program with a daylong cruise on board the Research Vessel Savannah and the introduction of a new smartphone app that will allow shrimpers to help scientists collect data on the problem.

Black gill is a condition Georgia shrimpers first noticed in the mid-1990s. Many shrimpers have blamed black gill for poor shrimp harvests in recent years, but until Frischer began his study, almost nothing was known about the condition. Now the researchers know black gill is caused by a parasite—a single-cell animal called a ciliate—although the exact type of ciliate is still a mystery.

The October cruise had three goals. The first was simply to collect data and live shrimp for additional experiments.

“We were able to collect enough live shrimp in good shape to set up our next experiment,” Frischer said. “We are planning on running another direct mortality study to investigate the relationship between temperature and black gill mortality. This time, instead of comparing ambient temperature to cooler temperatures as we did last spring and summer, we will investigate the effects of warming.” 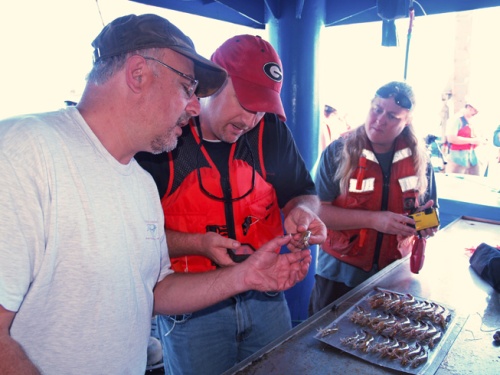 If his hypothesis is correct, Frischer believes researchers would expect that raising fall water temperatures to warmer summer levels in a laboratory setting will induce black gill associated mortality in the shrimp caught in the fall.

Those studies will be compared to those that are being conducted in South Carolina in a slightly different manner. Frischer expects the results should be similar.

“However, as it goes with research, we are expecting surprises,” Frischer continued. “We also collected a good set of samples that will contribute to our understanding of the distribution and impact of black gill.”

A second goal was to introduce and begin field testing a new smartphone application developed by Johnsen. The app is intended to be a tool that will allow shrimp boat captains and recreational shrimpers to assist the researchers by filling some of the holes in the data by documenting the extent of black gill throughout the shrimp season. The Georgia Department of Natural Resources conducts surveys of the shrimp population up and down the coast throughout the year. However, those surveys do not provide the researchers with the rich data set they need to really get an accurate assessment of the black gill problem.

A screenshot of the smartphone app for tracking black gill.

“Instead of having just one boat surveying the prevalence of black gill, imagine if we had a dozen, or 50 or a hundred boats all working with us,” Frischer said. “That’s the idea behind this app.”

The fishermen will use the app to document their trawls and report their data to a central database. Using GPS and the camera on their smartphone, they will record the location and images of the shrimp catch, allowing the researchers to see what the shrimpers see. If repeated by many shrimpers throughout the shrimping season, the information would give scientists a much more detailed picture of the prevalence and distribution of black gill.

“The app is complete and available on the app store, but we are still in the testing stages,” Johnsen said. “We want to make sure that it will be robust and as easy to use on a ship as possible before widely deploying it.”

Recruiting, training and coordinating the shrimpers will be the responsibility of UGA Marine Extension and Georgia Sea Grant.

“I think it should be entirely possible to at least have a small group of captains comfortable and ready to start using it when the 2017 season begins,” Frischer said.

Johnsen is excited about the app for what it can provide to the shrimping and research community, but also the implications it has for using apps to involve communities in general.

“There is still work to be done to improve the usability of these systems,” he said. “But I’m confident that we are going to see an increasing number of these ‘citizen science’ applications going forward.”

The final aim of the cruise was to bring together diverse stakeholders, including fishery managers, shrimpers and scientists, to spend the day together and share ideas.

“This was a good venue for promoting cross-talk among the stakeholder groups,” Frischer said. “I had many good conversations and appreciated the opportunity to provide a few more research updates.”

Frischer says he thinks the communication and cooperation among the various stakeholder groups has improved dramatically since the beginning of the study. He recalled that when the study began in 2013, tensions were high. Shrimpers were angry and demanded that something be done to address the problem of black gill. Meanwhile, fishery managers were unclear if black gill was even causing a problem and frustrated that no one could provide them any reliable scientific advice. The research community had not been engaged and given the resources to pursue valid investigations.

“In 2016, we still have black gill. The fishery is still in trouble, but it does feel like we are at least understanding a bit more about the issue,” Frischer said. “Most importantly, it is clear that all of us are now working together.

“My feeling is that the opportunity for us to spend a day like that together helps promote understanding, communication and trust among the shrimpers, managers and researchers.”

A research team from the University of Georgia Skidaway Institute of Oceanography has completed the first high-resolution, bathymetric (bottom-depth) survey of Wassaw Sound in Chatham County.

Led by UGA Skidaway Institute scientist Clark Alexander, the team produced a detailed picture of the bottom of Wassaw Sound, the Wilmington River and other connected waterways. The yearlong project was developed in conjunction with the Georgia Department of Natural Resources.

This shows a wide view of the Wassaw Sound survey map. Shallow areas are shown in orange and yellow, deeper areas in green and blue.

The survey provides detailed information about the depth and character of the sound’s bottom. This information will be useful to boaters, but boating safety was not the primary aim of the project. The primary objective was to map bottom habitats for fisheries managers. DNR conducts fish surveys in Georgia sounds, but, according to Alexander, they have limited knowledge of what the bottom is like. “One of the products we developed is an extrapolated bottom character map,” Alexander said. “This describes what the bottom grain size is like throughout the sound. Is it coarse, or shelly or muddy? This is very important in terms of what kind of habitat there is for marine life.”

A second goal was to provide detailed bathymetric data to incorporate into computer models that predict storm surge flooding caused by hurricanes and other major storms. Agencies like the United States Army Corps of Engineers, the Federal Emergency Management Agency and the National Oceanographic and Atmospheric Administration use mathematical models to predict anticipated storm inundation and flooding for specific coastal areas. A key factor in an accurate modeling exercise is the bathymetry of the coastal waters.

“You need to know how the water will pile up, how it will be diverted and how it will be affected by the bottom morphology,” Alexander said. “Since we have a gently dipping coastal plain, storm inundation can reach far inland. It is important to get it as right as we can so the models will provide us with a better estimate of where storm inundation and flooding will occur.”

Funded by an $80,000 Coastal Incentive Grant from DNR, Alexander and his research team, consisting of Mike Robinson and Claudia Venherm, used a cutting-edge interferometric side-scan sonar system to collect bathymetry data. The sonar transmitter/receiver was attached to a pole and lowered into the water from Skidaway Institute’s 28-foot Research Vessel Jack Blanton. Unlike a conventional fishfinder, which uses a single pinger to measure depth under a boat, the Edgetech 4600 sonar array uses fan-shaped sonar beams to both determine water depth and bottom reflectivity, which identifies sediment type, rocky outcroppings and bedforms, in a swath across the boat’s direction of travel.

The actual process of surveying the sound involved long hours of slowly driving the boat back and forth on long parallel tracks. On each leg, the sonar produced a long, narrow strip indicating the depth and character of the sound bottom. Using high-resolution Global Positioning System data that pinpointed the boat’s exact location, the system assembled the digital strips of data into a complete picture of the survey area.

All the other sounds on the Georgia coast were mapped in 1933, but for some reason data from that time period for Wassaw Sound was unavailable. When the team began this project, they believed they were conducting the first survey of the sound. However, just as the researchers were finishing the project, NOAA released data from a 1994 single-beam survey that had been conducted in advance of the 1996 Olympic yachting races that were held in and near Wassaw Sound.

Because of advances in technology, the current survey is significantly richer in detail than the one conducted in 1994. “We can zoom down to a square 25 centimeters (less than a foot) on a side and know the bottom depth,” Alexander said.

The survey produced a number of findings that were surprising. The intersection of Turner Creek and the Wilmington River is a deep, busy waterway. Although most of the area is deep, the survey revealed several pinnacles sticking up 20 feet off the bottom. “They are round and somewhat flat, almost like underwater mesas,” Alexander said.

The researchers determined that the deepest place mapped in the study area was a very steep-sided hole, 23 meters deep, in the Half Moon River where it is joined by a smaller tidal creek. They also found several sunken barges and other vessels.

The survey data set is available to the public on the Georgia Coastal Hazards Portal at http://gchp.skio.usg.edu/. Alexander warns that while boaters should find the survey interesting, the information is intended for habitat research and storm surge modeling, not for navigation. “Because the bottom of Wassaw Sound is always shifting and changing, as our survey showed, don’t rely on the data for safe navigation,” he cautioned.

Alexander has already received a grant for an additional survey, this time of Ossabaw Sound, the next sound south of Wassaw Sound. He expects work to begin on that survey in early 2015.