The models hurricane forecasters use to predict the paths of storms have become much more accurate in recent years, but not so much the models’ ability to accurately predict a storm’s intensity. Now, underwater gliders, operated by researchers at the University of Georgia Skidaway Institute of Oceanography, are part of a national effort to use marine robots to improve the accuracy of storm forecast models.

Two storms from the 2018 hurricane season provide examples of how quickly storm intensity can change. Hurricane Florence was predicted to be a Category 5 storm, but she weakened significantly before making landfall in North Carolina as a Category 1 storm on September 14. On the other hand, a month later, Hurricane Michael grew from a Category 1 to a Category 5 storm in just two days and hit the Florida panhandle on October 10.

Hurricanes feed off of heat from warm ocean waters like that found in the Caribbean, and in the Gulf Stream and shallow waters off the southeast United States, known as the South Atlantic Bight. This can be a tremendous source of energy for developing storms. Heat is transferred between the ocean and atmosphere at the ocean’s surface, but it is important to understand the amount of subsurface heat as well.

“Places where warm waters near the surface lie over cooler water near bottom, winds and other factors can mix up the water, cooling the surface and limiting the heat available to the atmosphere,” UGA Skidaway Institute researcher Catherine Edwards said. “Satellite data provides a nice picture of where the surface ocean is warm, but the subsurface temperature field remains hidden.” 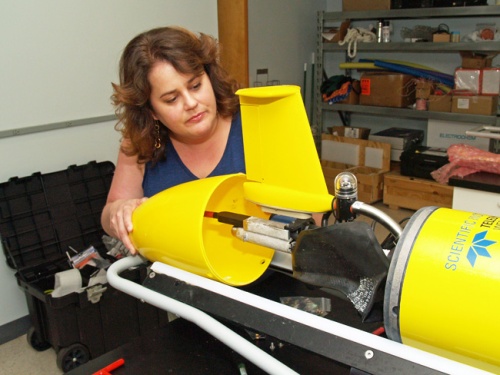 This is where autonomous underwater vehicles, also known as gliders, can collect valuable information. Gliders are torpedo-shaped crafts that can be packed with sensors and sent on underwater missions to collect oceanographic data. The gliders measure temperature and salinity, among other parameters, as they profile up and down in the water. Equipped with satellite phones, the gliders surface periodically to transmit their recorded data during missions that can last from weeks to months.

“This regular communication with the surface allows us to adapt the mission on the fly, and also process and share the data only minutes to hours after it has been measured,” Edwards said. “By using a network of data contributed by glider operators around the world, the U. S. Navy and other ocean modelers can incorporate these data into their predictions, injecting subsurface heat content information into the hurricane models from below.”

The 2018 hurricane season provided Edwards and her colleagues a fortuitous opportunity to demonstrate the value of glider data. Edwards deployed two gliders in advance of Hurricane Florence. One was launched off the North Carolina coast and the other further south, near the South Carolina-Georgia state line. The gliders discovered the models’ ocean temperature forecasts were significantly off target. Edwards points to charts comparing the predictions from ocean models run in the U.S. and Europe with the actual temperatures two days before Florence made landfall.

On the south side of the storm path, the models predicted that the ocean had a warm, slightly fresh layer overtopping cooler, saltier water below, but the glider revealed that the water column was well-mixed and, overall, warmer and fresher than predicted. On the north side of the storm, the models predicted warm, well-mixed water, but the glider detected a sharp temperature change below the surface, with a much cooler layer near-bottom. However, the most surprising part was just how stratified the water was.

“There is almost a 14-degree Celsius (approximately 25 degrees Fahrenheit) error that the glider corrects in the model,” she said. “The model and data agree near-surface, but the models that don’t use the glider data all miss the colder, saltier layer below. The model that incorporated glider data that day is the only one that captures that vertical pattern.”

Not only can gliders provide a unique view of the ocean, they fly on their own, reporting data regularly, before, during and after a hurricane, making them a powerful tool for understanding the effects of storms.

“The glider data is being used in real time,” Edwards said. “These real time observations can improve our hurricane forecasts right now, not just in a paper to be published a year from now.”

Edwards and collaborator Chad Lembke, at the University of South Florida, had a third glider deployed in August before Florence as part of a glider observatory she runs for the Southeast Coastal Ocean Observing Regional Association (SECOORA). While it was recovered about a little over a week before Florence made landfall, the glider helped define the edge of the Gulf Stream, which is an essential ocean feature that is very hard for models to get right.

“So it’s possible that the data from that glider already improved any tropical storm predictions that use ocean models and take that glider data into account, because the Gulf Stream is so important in our region,” Edwards said.

Edwards works with colleagues from other institutions through SECOORA. Together they are making plans for the 2019 hurricane season. Funded by a $220,000 grant from the National Oceanic and Atmospheric Administration, they plan to pre-position a number of gliders in strategic locations to be ready for deployment in advance of incoming storms.

“Gliders are like the weather balloons of the ocean,” Edwards said. “Imagine how powerful a regular network of these kinds of glider observations could be for understanding the ocean and weather, and how they interact.”