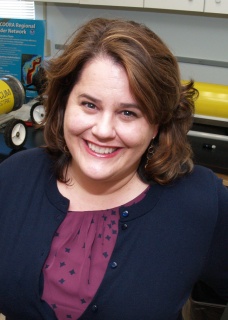 Edwards’ research focuses on answering fundamental questions in coastal oceanography and fisheries sciences with autonomous underwater vehicles (AUVs). Using AUVs, also called gliders, she and her team are developing novel ways to optimize their use with engineering principles and real-time data streams from models and observations.

While at UGA Skidaway Institute, Edwards has been awarded more than $2 million dollars on 12 projects totaling more than $12 million from NOAA/Navy sources, the Gulf of Mexico Research Initiative and four different programs within the National Science Foundation. As the founder of a regional glider observatory, she serves as the lead scientist in a new project that places gliders in the paths of hurricanes to better predict their intensity at landfall. Edwards is a co-primary investigator in a large $5 million observational program studying exchange between the coastal and deep ocean at Cape Hatteras. In an effort funded by NSF’s Smart and Autonomous Systems program, Edwards is also working with researchers from Georgia Tech and Gray’s Reef National Marine Sanctuary to utilize gliders and acoustic tagging to track fish migrations.