Chemical oceanographer Daniel Ohnemus has joined the faculty of UGA Skidaway Institute of Oceanography and the UGA Department of Marine Sciences as an assistant professor. 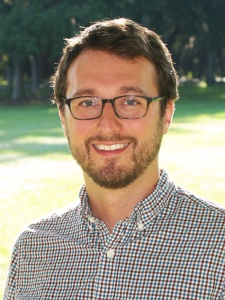 Ohnemus received his bachelor’s degree from Williams College and his Ph.D. in chemical oceanography from the Massachusetts Institute of Technology and Woods Hole Oceanographic Institution Joint Program. He joined UGA Skidaway Institute following a postdoctoral appointment at Bigelow Laboratory for Ocean Sciences in East Boothbay, Maine.

Ohnemus’ research focuses on marine particles—the mixture of living organisms and non-living chemicals that transport and transform material within the oceans.

“All living organisms need small ‘trace’ amounts of elements like iron and copper to live,” Ohnemus said. “Unlike on land where plants can get these elements from soil, algae in the oceans have to get them from much rarer things like dust, other cells or seawater itself. The limited availability of these elements is an important control on many marine ecosystems.”

The son of a lobsterman and an elementary school educator, Ohnemus grew up on Cape Cod and became fascinated with the ocean at a young age. In fourth grade, his class visited Woods Hole to take part in a satellite video call with marine scientists off the Galapagos Islands. Seeing underwater robots explore a coral reef got Ohnemus hooked on marine science.

At Williams College, he pursued a double major in biology and chemistry. After graduation, he returned to Woods Hole, first as a research technician and later as a graduate student. After earning his Ph.D., he completed a postdoctoral appointment at the Bigelow Laboratory for Ocean Sciences, continuing to concentrate on marine particles and trace elements.