Gray’s Reef explores sounds of the ocean with virtual learning 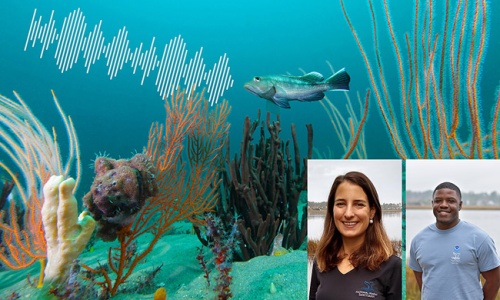 Kris Howard, Alison Soss, and Ben Prueitt provided an overview of the NOAA Sanctuary System and Gray’s Reef, including a virtual live aboard experience on the NOAA Ship Nancy Foster. Webinar participants could also hear audio from hydrophones listening for fish noises and acoustic receivers to track movement of black sea bass. The webinar concluded with a question and answer session from the at-home audience of students, teachers and the general public. The full webinar can be found at the YouTube channel for Exploring by the Seat of Your Pants 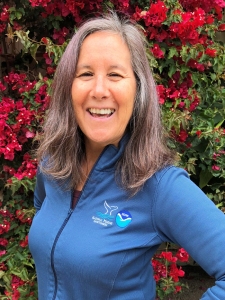 Lisa Wooninck began as acting superintendent of Gray’s Reef National Marine Sanctuary in September 2018. Lisa has a Ph.D. in ecology and evolutionary biology from the University of California Santa Barbara. Her interest in policy and marine resource management stems from her time as a 2000 Knauss Sea Grant Fellow in former Congressman Sam Farr’s office. She began her NOAA career as a research fishery biologist at NOAA Fisheries headquarters and Santa Cruz lab. Her passion for using science to inform policy however was awakened and she jumped at the opportunity to join the sanctuary team in 2008. She initially worked at Monterey Bay National Marine Sanctuary as a policy analyst, and then joined the West Coast Regional team in 2010 as the policy coordinator for the five sanctuaries on the west coast.

Lisa has experience in policy and planning. She has also worked to coordinate conservation and user groups, and state and federal partners to develop integrated ecosystem-based management systems, and ecologically and economically sustainable practices. She has represented sanctuary interests to fishery managers and educated them on the common goals shared by sanctuaries and fisheries management. She has also led an Office of National Marine Sanctuaries team to highlight the world-class recreational activities, such as whale watching and sport fishing, offered by thriving ecosystems of national marine sanctuaries.

Lisa is guided by “malama,” a Hawaiian concept that expresses care, respect and stewardship for the environment and humans, and our obligation to care for both. Lisa also believes strongly in team work and looks forward to working with the GRNMS team, their partners and friends.

“We’re having a lot of fun putting together this year’s festival,” organizer Chris Hines, deputy superintendent of Gray’s Reef, said.  “Our theme this year is ‘Our Community, Our Ocean.’ These beautiful movies highlight the deep bond with nature and the ocean we are so fortunate to experience as a coastal community, and how important a healthy ocean is to preserving our way of life.”

On tap for the 3D showings at the Trustees Theater Feb. 3-4 are “Galapagos 3D: Nature’s Wonderland,” “The Last Reef 3D,” “Wonders of the Artic 3D” and “Secret Ocean 3D.” “Galapagos 3D” is directed by award winner Martin Williams, who is well known for his documentaries with David Attenborough. “The Last Reef 3D” was shot in five countries and is the production of Academy Award nominees Luke Cresswell and Steve McNicholas, while “Wonders of the Arctic 3D” is a sweeping film by David Lickley, who describes himself as a “wilderness environmental-themed filmmaker. “Secret Ocean 3D” is a beautiful jewel of a movie by Jean-Michel Cousteau.

The Tybee Post Theater offerings on Feb. 5 will include a delightful sampling of films from the San Francisco International Ocean Film Festival, the premier venue in North America for ocean-related movies, most of which are largely unavailable to the general public.

“Our partnership with the Tybee Post Theater this summer exceeded our expectations, with more than 1,000 attendees expressing their interest in ocean-themed movies,” said Hines. “We are excited to expand the film festival and deepen our engagement with our beach communities.”

Like last year, Gray’s Reef suggests a donation of $10 per day for adults, $5 per day for children, students and military, to benefit the Gray’s Reef National Marine Sanctuary Foundation. The foundation will host a pre-festival party on Feb. 2, with limited tickets available.

Rivers to Reefs is an educational expedition for teachers, focused on Georgia’s Altamaha River watershed. During the six-day trip, 16 Georgia science teachers canoed the Oconee, Ocmulgee and Altamaha rivers into the Sapelo estuary, crawled through salt marshes, traveled to Gray’s Reef and trawled the Wilmington River. They learned and explored the connections between the watershed and the ocean. 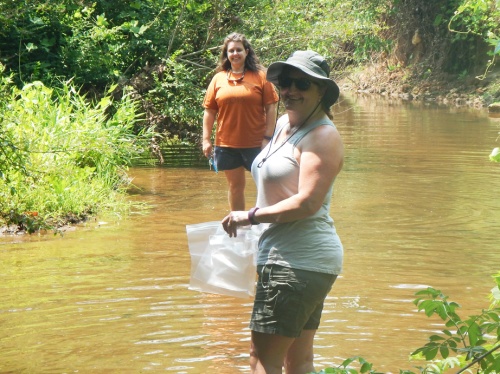 The week was packed with activities that most teachers never experience, beginning with a behind-the-scenes orientation at Georgia Aquarium, and it included an offshore trip to Gray’s Reef National Marine Sanctuary aboard the first working research vessel the educators had ever seen close up, Skidaway Institute’s R/V Savannah. In between, the group explored creeks, waterfalls, rivers and estuaries, and saw an abundance of flora and fauna. They frequently stopped to collect water samples, conduct water quality tests and record environmental factors to determine the overall health of the creeks and streams that flow to the river system. As the week progressed, the teachers developed an understanding of the profound influence the waters flowing through the Altamaha River watershed have on the health of Gray’s Reef and were inspired to teach their students about environmental responsibility and ocean literacy.

Always a highlight of the workshop, the marsh crawl on Sapelo Island was a memorable experience. The group sloshed on their bellies through the thick dark mud to learn why marshes are considered some of the most important and productive habitats on Earth. The estuary that encompasses the salt marsh, where the freshwater from the Altamaha River mixes with the saltwater of the Atlantic, is one of the largest estuary systems on the Atlantic coast. 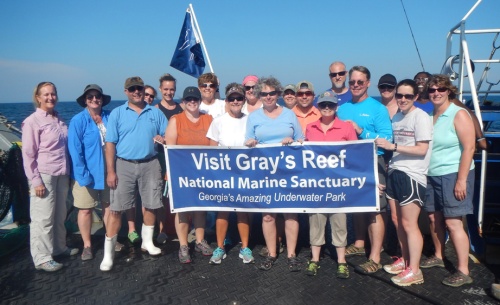 The teachers on board the Research Vessel Savannah.

Waters were calm for the voyage out to Gray’s Reef National Marine Sanctuary on the R/V Savannah under the command of Capt. John Bichy, marine superintendent at UGA Skidaway Institute. With extensive assistance from the R/V Savannah crew, the teachers conducted water quality tests at three separate points in the ocean. Meanwhile, the ship’s crew pulled a trawl net through the ocean at midwater depth and brought in many interesting fish, a large pile of Georgia shrimp and a handful of sharks, including a hammerhead and a small Atlantic sharpnose shark. During the trip, the teachers were delighted when they were treated to lessons by professor Marc Frischer of Skidaway Institute on black gill in shrimp and on pelagic tunicates called doliolids. While in the sanctuary, the crew deployed an underwater camera to allow the teachers to see the reef and its sea creatures in real time, without getting wet.

On the final day of Rivers to Reefs, the teachers boarded UGA’s R/V Sea Dawg, a smaller vessel used by the UGA Marine Education Center and Aquarium, a unit of the UGA Marine Extension and Georgia Sea Grant. Capt. John “Crawfish” Crawford and Anne Lindsay, associate director for marine education, conducted a field class during the two-hour trawling voyage in the Wilmington River. The teachers recorded the catch for research purposes and ended their trip with a wrap-up by Frischer and the expedition leaders, before scattering across Georgia with great memories and a treasure trove of experiences to pass on to their students this fall.