Hurricane Matthew is now a memory, but like most of the coastal area, the Skidaway Marine Science Campus still bears signs of its passage.

The Skidaway Institute docks were heavily damaged by wave action at both at the main campus and the Priest Landing sites. While most of the campus buildings remained above the water line, the storm surge inundated some of the facilities shops at the north end of the campus with up to 24 inches of water. Due to the water damage, extensive internal repairs were needed. 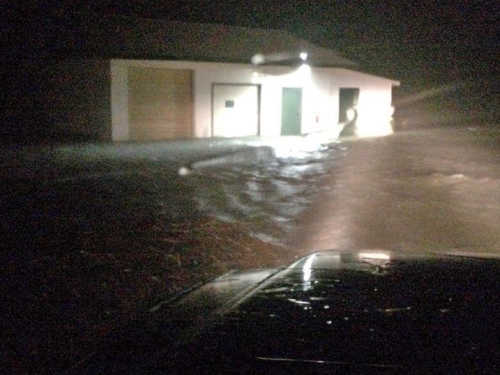 One of Skidaway Institute’s shop buildings at the height of the storm.

The UGA Aquarium was able to reopen the weekend following the storm, but parts of the Jay Wolfe Nature Trail remain closed due to downed trees and debris.

It also became necessary to cancel the campus’s annual open house event, Skidaway Marine Science Day. Both Clark Alexander, interim director of UGA Skidaway Institute of Oceanography, and Mark Risse, director of UGA Marine Extension and Georgia Sea Grant, had hoped to reschedule the event, but no other date was available this fall.

“We are upset we are not able to offer this great event this year,” Alexander said. “However, we will be back bigger and stronger in 2017.”

Skidaway Marine Science Day has been an annual event on the Skidaway campus since 2001. The free, family-oriented program is presented jointly by the UGA Skidaway Institute, UGA Marine Extension and Georgia Sea Grant, and Gray’s Reef National Marine Sanctuary.