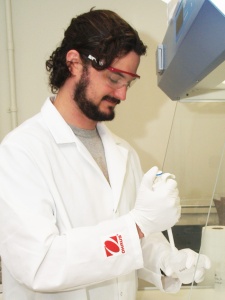 Spending the Christmas holidays and the better part of January and February on a ship frozen solid in the Arctic ice cap isn’t most people’s idea of a great way to spend the winter. However, University of Georgia Skidaway Institute of Oceanography scientist Cliff Buck is planning to do just that. Buck is part of a major, international research project named Multidisciplinary drifting Observatory for the Study of Arctic Climate or “MOSAiC.” The goal of the project is to sail the German ice breaker Research Vessel Polarstern into the Arctic Ocean until it becomes locked in the ice and leave it there for a year, all the while using it as a headquarters for scientists to study Arctic climate change.

“We care about this because the Arctic is turning out to be one of the more sensitive parts of the planet when it comes to climate change,” Buck said. “It’s warming at rates much higher than other parts of the world, and as it warms, many things are happening, such as the reduction in the expanse of sea ice.”

Those changes have implications on the means and rates that materials flow into the region, which, in turn, affect plant and animal life. Buck’s role will be to monitor the atmospheric deposition of trace elements like iron. Trace elements appear in the ocean in minute concentrations — parts per billion or even parts per trillion. However, they play a key role in the growth of phytoplankton — the tiny marine plants that form the very base of the marine food web and produce approximately half the oxygen in our atmosphere. In much of the world’s ocean, it is the presence or scarcity of iron that regulates the growth of phytoplankton.

Buck and his colleagues hope to develop a better understanding of how trace elements make their way from the upper atmosphere to the ice cap. They can arrive either as little particles, floating in the atmosphere and settling like dust, or they can fall as part of a raindrop or snowflake.

“In the Artic, the composition and abundance of aerosols tend to vary seasonally which is the reason it is important to get a series of observations over a long time scale to see how deposition rates of these aerosols change over the course of a year,” Buck said. “We care about that because in areas removed from river input and other continental influences, atmospheric deposition can be the primary source of trace elements like iron for the surface ocean.”

Buck and colleagues from Florida International University and Florida State University will use a technique utilizing a radioactive isotope of beryllium, itself a trace element, to measure the rate of atmospheric deposition. Beryllium-7 is created only in the upper atmosphere by the exposure of nitrogen and oxygen to cosmic rays, and has a half-life of 53 days. By measuring the concentration of beryllium-7 in samples, Buck will be able to estimate the rate beryllium and other trace elements are being deposited on the surface. 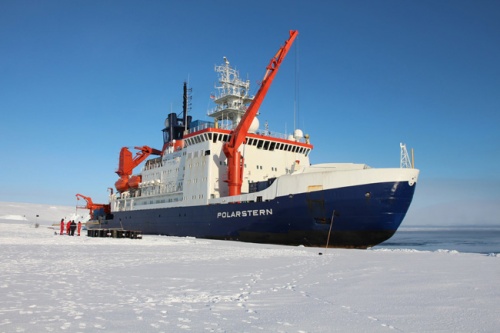 The research team will take turns working on the ship in shifts of two months at a time. As many as 40 to 50 scientists might be on the R/V Polarstern during each shift, collecting samples and making a wide range of observations throughout the year. Buck is tentatively scheduled to be on board from mid-December 2019 through mid-February 2020.

“I really have no one to blame but myself for being assigned a winter shift,” Buck said. “It is very difficult to make these measurements during the winter, so it is very important to us to insure those winter samples are collected properly. When I said that out loud, they said ‘so I guess you want to go in the winter.’”

Although locked in the Arctic ice cap, the R/V Polarstern will not be stationary. The area where the researchers anticipate the ship will be frozen is subject to a surface current called the Transpolar Drift which propels sea ice from the East Siberian Sea to the Fram Strait, off the east coast of Greenland. The R/V Polarstern could drift as much as 1,500 miles during its year locked in the ice cap.

“The Arctic Ocean is a very interesting place with a lot of wind and a lot of physics going on up there,” Buck said. “You may not perceive the movement, but you will be moving.”

Buck’s participation in the MOSAiC project is funded by a four-year, $350,412 grant from the National Science Foundation Arctic System Science Program.