Georgia Power erected a meteorology tower on the UGA Marine Science Campus. The tower is the first construction of a two-year project that will also include three wind turbines. The 198-foot tower was raised into position on Feb. 24. 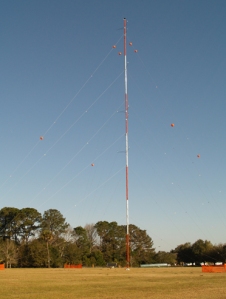 The structures are part of a demonstration project to study the feasibility of generating wind power in Georgia using small scale wind turbines. The Georgia Power-sponsored project will feature small scale turbines, up to 10 kilowatts each—the size customers might install on their own property—plus a meteorological tower.

Georgia Southern University is also partnering in the research for this project. GSU’s primary focus is to study the environmental aspects of small wind turbines including the impact on noise levels and avian life.

A time lapse video of the raising can be viewed on YouTube:

One response to “Meteorological tower erected on campus”