Spearheaded by Gray’s Reef’s events and volunteer coordinator Jody Patterson, staff and volunteers from the sanctuary as well as Gray’s Reef National Marine Sanctuary Foundation welcomed 16 teams of students who came to compete for first place and a shot to compete in the national MATE competition. The competition is open to young scientists from kindergarten to college, and it challenges them to create innovative solutions to real-world problems faced by the National Oceanic and Atmospheric Administration and other marine industries. 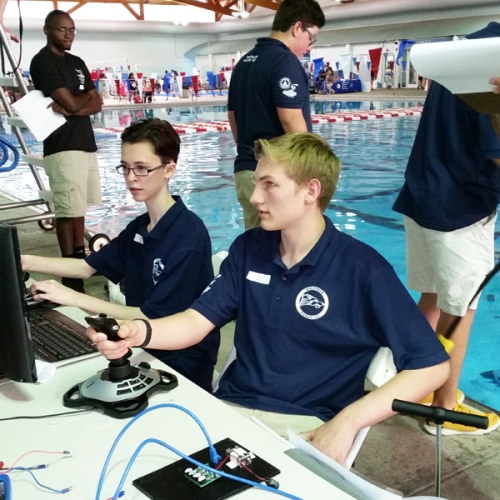 This year’s theme was “Port Cities of the Future,” which prompted students to use their underwater robots to perform tasks that could be utilized to clean and maintain the waters of port cities. MATE encourages students to develop their entrepreneurial skills by creating a business plan that supports their innovative marine technology as well as marketing materials that showcase their work. Students choose from four classes of competition in which they can present their marketing materials and demonstrate their robots.

Sixteen student teams from middle, junior and high schools competed in the 2016 Gray’s Reef Southeast Regional MATE ROV Competition at the Chatham County Aquatic Center on April 30. After a full day of competition, seven-time regional champion Carrollton High School won the right to advance to the international round, held in June at the NASA Johnson Space Center Neutral Buoyancy Lab in Houston.

Carrollton High School, located west of Atlanta, has fielded strong teams that have placed as high as ninth in the global competition. Its team InnovOcean holds high hopes of taking home the top prize this year and will compete against students from various locations including Canada, Russia, Hong Kong and Scotland. 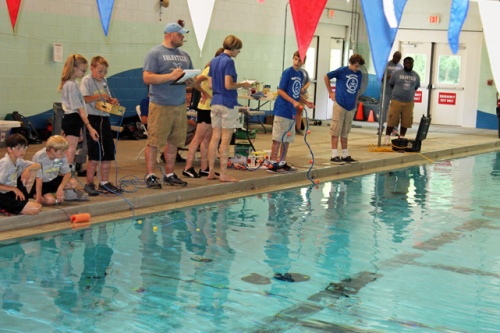 The ROV competition requires students to build tethered underwater robots — called remotely operated vehicles, or ROVs — from scratch, and then challenges them to perform tasks simulating real-world operations conducted by exploration organizations like NOAA’s National Marine Sanctuaries, NASA and other marine agencies worldwide. Teams are able to choose from four different classes of competition defined by skill level, instead of age, which further illustrates real-world circumstances. Only two classes — the Explorer and Ranger levels — are eligible to compete at the international competition.

In order to win, teams must not only build and successfully pilot an underwater robot, they have to create a company to market and sell their ROV. Students prepare posters, product spec sheets, safety procedures, design abstracts, business cards and presentations to working professionals who serve as contest judges.

The sanctuary’s Team Ocean volunteer divers worked all day with NOAA divers to continually set up the underwater task components. Other volunteers served as judges and safety inspectors.

“It is a privilege to host the Southeast Regional ROV competition each year,” said Gray’s Reef National Marine Sanctuary Superintendent Sarah Fangman. “To properly protect marine life and special areas like Gray’s Reef, we need tools to help us explore and understand the mysteries of the ocean. These students — future engineers and scientists — will create the next generation of instruments used at NOAA, NASA and the maritime industries.”